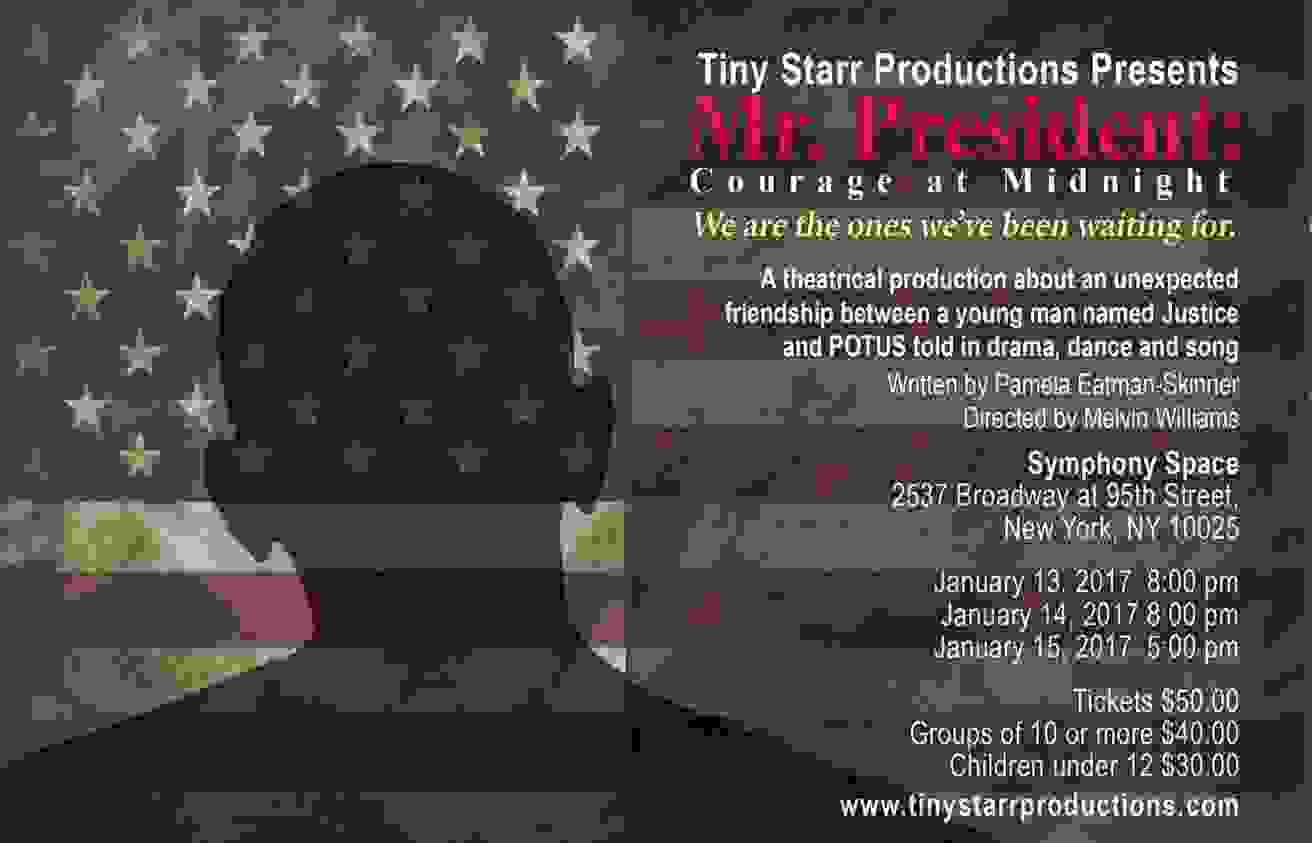 A theatrical production about an unexpected friendship between a young man named Justice and POTUS told in drama, dance and song.

We are the ones we've been waiting for:

An award winning Equity/SAG/AFTRA union actor and writer that has worked both nationally and internationally.  He has worked opposite powerhouses such as Meryl Streep, Kevin Kline and a sleuth of others and directed by pioneers such as George C. Wolfe, Woody King Jr., and other accomplished directors.  Nixon started his journey as a method actor during a two year full scholarship at the prestigious Lee Strasberg Theater and Film Institute in Los Angeles, California. After, he attained a Master's degree in Fine Arts in Theater.  Nixon recent theater credits includes: Brooklyn Gangster, The Wire and Law and Order. His up and coming project is Universal Motion Pictures: King of Paper Chasing 2.  He is proud to be working with the cast and crew at Tiny Starr Productions.  He would like to dedicate this production to Change.

Audrey Martells is an actor, singer, songwriter who made her theater debut in The Scottsboro Boys directed by Susan Stroman and Jeff Whiting. She has co-starred on Blue Bloods and performed in the Motion Picture, Chicago and Save the Last Dance as a featured singer. As a songwriter, her songs have been recorded by George Benson and Randy Crawford among others. Audrey is thrilled to share the stage with this talented cast, brilliant director and wonderful playwright.

Tyneshia is no stranger to the stage.  She began singing at the age of six as lead singer of the Hill Sisters. She attended the Choir Academy of Harlem as a member of the Girls Choir of Harlem.  This relationship led to tours and her later becoming the Artistic Director of the Boys and Girls Choir of Harlem Alumni Ensemble. She holds a B.S. in Business Administration but her love for bringing laughter and joy to others brought her back to the stage. She made her acting debut in October of 2012 in Tiny Starr Productions’ “Mr. President and she hasn’t looked back since.

Originally from New Orleans, La, has been living in New York for the past 8 years. It wasn’t until she moved to New York, that she fell in love with the stage. She has been studying with Mel Williams for 5 years and has been a member of the Tfang organization for a year. Tinisha has appeared in several movies, commercials, plays and several showcases. Her biggest challenge yet has been writing and creating her 1st one woman show. Tinisha is thankful to God for giving her the dream of acting, and giving her the opportunity to make her dream her reality. Also, she is thankful for her family and true friends, absent and present, for their continued support

Ben Rogers was born in the county of Dorset in south-west England. He developed an early interest in acting from his Grandmother whose involvement in stage and theatre he avidly observed. In 2004 he moved to New Orleans to play music and was also involved in many film and television projects. Ben moved to New York City in April of 2012 and began studying under Mel Williams, eventually becoming a member of The Theatre for a New Generation. He enjoys playing many different and challenging characters and roles, including Samuel Beckett's Krapp in Krapp's Last Tape and the Elephant Man.  He is always looking to expand his repertoire.  Ben is extremely thankful and honored to be working with the talented cast and crew for Tiny Starr's production of Mr. President: Courage at Midnight. You can contact him at baarogers@hotmail.com.

Barry A 27 year old professional actor hailing from Far Rockaway, Queens.  For the past five years, he has been training and performing with Theatre For A New Generation (TFANG), bringing life to every role he acquires.  Rosario has participated in numerous films and Off-Off Broadway productions.  From George Tillman Jr.’s “The Inevitable Defeat Mister Pete” to the New York Times critically acclaimed “FreeFall”, his versatility reflects his warm, yet edgy appeal. TFANG’s Creative Director Mel Williams continues to serve as an inspiration.

Amanda is very excited to be part of this production of Mr. President Courage at Midnight.  Fluent in Spanish, she has been training and performing under the guidance of director Mel Williams for three years and is currently seeking her Bachelor’s Degree from The New School with a focus in Theater and Journalism.

David Kenneth Sommerville was raised by a single parent father in Annapolis, Maryland. Always interested in acting, David avidly pursued a performing career.  He auditioned for several local acting jobs in the Washington, DC/Baltimore metro area and was cast in several projects including, “Project Run-A-way”, “Freedom Bound” and a regional tour of Historic Annapolis.  David was cast as a lead in the MSNBC

re-enactment series, of the D.C. Sniper saga. His desire to continue his theatrical training led him to New York to study scene study and character analysis with respected acting coach and director, Mel Williams.  Under Theater For A New Generation (TFANG), David’s stage performances include, “The Lottery”; “The Colored Museum”; “Casablanca”; “Love is Forever”; “Homeward Bound” and “Julius Caesar”.  David would like to thank his family and friends for their unending support.